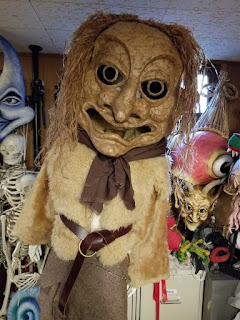 Here's a preview of how the mask is looking so far! Things finally came together last night, but this mask has been a challenge this past week. Here are three things I will do differently next time. 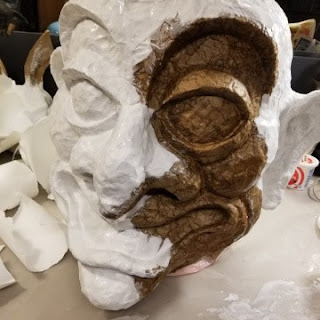 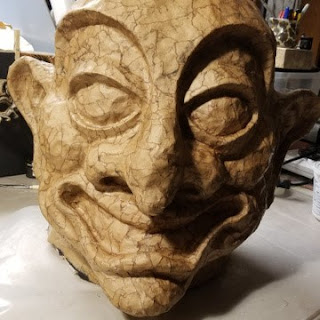 3. The third lesson occurred yesterday, in the process of pulling the core or armature base (bucket, newspaper, masking tape, clay) out of the head.

In the past when I have worked on very large paper mache props and puppet pieces I have used wallpaper paste for the paper layers. But both brands of paste I like have been discontinued over the years, and I have not been able to find a paste replacement free from irritating chemicals and safe for the environment. (Methyl cellulose has potential, but I want to stress test it further--it may not be strong enough for a very large piece).

Anyway, I decided to use dilute PVA white glue for this mask, because it is labeled "Non-toxic", it is extremely strong with paper, and the Material Safety Data Sheets indicate it breaks down quickly and is not considered an environmental pollutant as long as not burned and is kept out of bodies of water. So while it is not "natural" as is my preference, it seemed like an adequate compromise for this project.

And it worked great! In fact, maybe too great... Unlike the wallpaper paste I used in the past, it soaked right through the paper towel release layer adhering it to the clay sculpt. In 20 years of doing paper mache with this method, I have never had this issue! So much of yesterday was spent digging and chipping the clay layer out of the inside of the face. Then today I will use a wire brush to remove the last dry bits from inside, (followed by that one last layer of paper mache on the inside to cover the remaining shreds of paper towel).

Anyway, NEXT time I will use Methly cellulose paste for the very first layer of paper mache that goes over the paper towel release layer. (Subsequent layers can then be PVA glue without worry of it soaking through onto the clay).

This mask has been a good teacher! 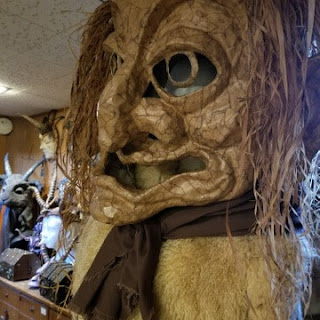 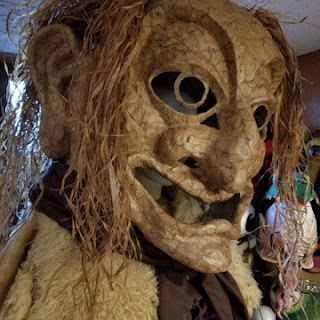